The garden city of Terramar: modernity and well-being in a Mediterranean dream

PrevWhat does the restoration plan for the Riera de Ribes consist of? Five specific measures
The history of the Autodrome GrandstandNext

When it was first conceived, the Autodrome Terramar was described as an innovate, unique project. Indeed, it was the first contact that Catalan and indeed Spanish society had ever had with motor racing. But why exactly was the Autodrome build on the grounds of Clot d’en Sidós near Sant Pere de Ribes?

The answer is actually very simple. The Autodrome was a key component of the Terramar garden city project, developed by Francesc Armengol, an industrialist from Sabadell. In fact, Armengol was also the promoter of the Autodrome.

The creation of the Terramar garden city involved importing residential models from Nice and the Côte d’Azur, glamourous destinations well known for their high quality of life and warm Mediterranean weather. But whilst visitors to the French Riviera were mainly British and Central Europeans looking for sun, the Terramar project was directed at people from Barcelona. The growth in car and rail travel had made it much easier for people to move around the country and the wealthy classes had developed a taste for spending their summers in either inland Catalonia or on the coast. Sitges had since become a popular choice.

At the turn of the century, the town had experienced progressive changes thanks, in part, to the return of the so-called ‘Americanos’. These were people from Sitges who had emigrated to the Americas, particularly Cuba, to make their fortune. On their return, they had begun to build houses and majestic mansions. Some of this progress was also due to the arrival of Santiago Rusiñol, who made the town into one of the capitals of Modernism.

As a result of all this, Sitges began to attract the attention of the most wealthy and cultured members of Barcelona society. In 1916, the first Spanish tourism hotel was opened (the Hotel Subur), and in 1918, the Maricel complex was finished, one of the most important works of Noucentisme architecture and home to an important collection of Hispanic art by Charles Deering. Clearly, things were changing in Sitges. Culture, tourism and leisure were moving closer together and are still closely intertwined to this day.

The garden city was intended to be a residential area by the beach where people could spend their summers. Building began in 1919 in an area which, until then, had been mainly occupied by dunes, vineyards and fields. The resort was accompanied by a 1.5-km seafront promenade which connected to the Paseo de la Ribera.

This development was led by the company Parques y Edificaciones and consisted of large houses on considerably large plots. This meant that Terramar would become a large open space filled with pines, oleanders and other spices, all of which have provided the green landscape that is still there today.

This urban project went further than just reflecting the aesthetic aspects of the Noucentisme movement and also explored its more conceptual aspects. Armengol developed spaces for leisure, designed for activities that were just starting to emerge. One of these was the Autodrome. The Terramar Gardens were finally opened in 1923, the same year as the Autodrome, and boasted a wide promenade area with many varieties of plant life and artificial lakes, which is still today a place of peace and well-being.

During this same year, building work began for the Terramar Park hotel. However, due to financial problems, this would take ten years to complete, and this significantly affected the development of the Terramar resort. There was originally plans for a casino in front of the hotel, but this never came to fruition. However, some of the work that was completed included the tennis courts and a golf course, which was opened in 1927.

Alongside all the urban development and the various leisure activities, the company also started a fortnightly cultural magazine named ‘Terramar, Fortnightly Art, Leisure and Sports Magazine’ and edited by the cultural activist Josep Carbonell i Gener. The magazine was published between 1919 and 1921 and was a space to promote and discuss the arts. It also served as a promotional platform for the resort itself and sought to add a certain prestige to Terramar through its cultural offerings. 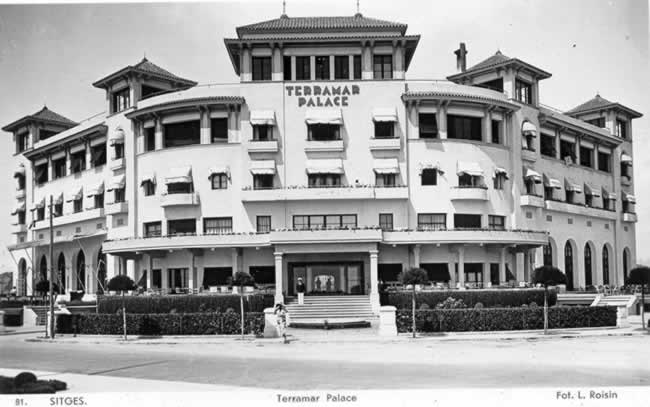 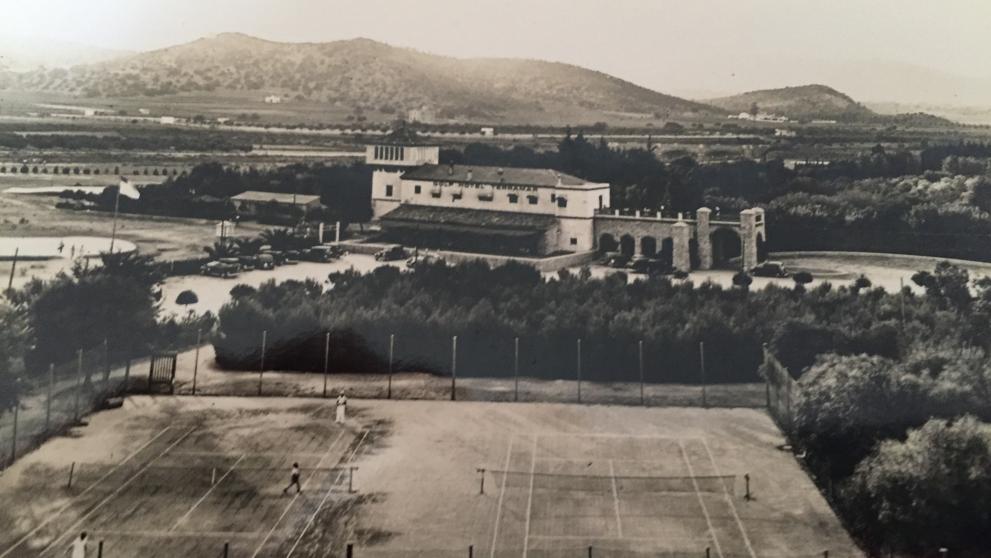 Images: On the left, the Terramar Palace hotel with its original Noucentisme design. On the right, the tennis courts and clubhouse of the new golf club